I’ve opened a quadratic fund to help offset the development costs and to gauge interest in supporting the new Apple M1 chip.

Pledged what I can to hopefully kick it off.

Some coins from me, as well!

Let’s get more eyes on this!

Alright folks, get ready for me to be the hypeman again.

We’ve gotten a number of inquiries here about ARM64, and specifically the Apple M1 flavor of it. We’ve also had a few folks run into some papercuts with Docker on MacOS, similar to how it was for Docker on Windows.

In my professional capacity with UAV4Geo, I’ve also received a number of inquiries about M1 support.

So, Piero/UAV4Geo are my employer, but I’m putting that hat aside for a moment and putting back on my “end user” hat.

I think we, as a community, have a few really important, big things to be gained by helping Piero take this goal to the finish line.

There is no denying that the Apple M1 is an incredibly impressive ARM64 chip (and in general, just an absolutely performant and efficient chip at ALL, across x86_64 [Intel/AMD] as well). We have had a few users attempting to help us fix up our toolchain to be ARM64 ready. If we can grab M1/ARM64 support, the number of devices available to run OpenDroneMap natively on increases greatly. I think we will continue to see the proliferation of ARM64 devices in the mobile computing space from Microsoft, Apple, and others. It also means that the Raspberry Pi 4B 8GB would make a mean starter unit for someone, or a great piece of a compute cluster!

This was a huge benefit going on in the background of the Windows native port effort, and I believe similar benefits will be had by pursuing Apple M1/ARM64 support. Improvements to one area of the codebase stand to benefit everyone, and we may even find some optimizations and other improvements that we maybe didn’t focus on prior! So in other words, this port effort and all the work that goes into it should certainly help the docker, Linux native, Lightning, and Windows native folks as well as the MacOS native and M1/ARM64 folks that are being focused on currently.

Just as it helped the UX of the Windows users (no more tweaking Docker RAM/CPU/Storage allocation), progressing towards a MacOS native build means our MacOS friends and community users will also eventually have less Docker management headaches! This isn’t a guarantee with this particular development effort, but the work on the Apple M1/ARM64 support will put us much further down this path than we are currently!

How You Can Help

Do you know any forums, groups, or maybe work/industry folks we’ve not reached yet? Please let them know what we have going on!

We’re making good progress on this — 70%! But also cutting it very close to deadline. Let’s get this over the top!

Another $50 pledge would (with the help of the Quadratik subsidy) bring the remaining balance down to just $1271!

We are SO close!

Another $10 pledge would (with the help of the Quadratik subsidy) would bring the remaining balance to just $193!

We are SO close!

Does anyone know folks we’ve not reached yet who might be interested in what we have going on?

What comes next? Let’s find out together!

Bam. Done. Thanks to Cristiano Giovando for bringing this home!

Time for some celebration! Can’t wait to see this come out.

It is really exciting! We gained so much in the last year by our upgrades for snap packages and the Windows native port. This should also be pretty awesome!

With two days left, Sean Thomas threw some in to help out!

I don’t believe we have any “stretch” goals defined this time, but every dollar helps Piero work towards this huge improvement!

Work should begin pretty prompty after the close of this funding round, so get ready for updates to come in. Hopefully we can keep everyone updated on the progress and what things we’ve “won” with this undertaking

We’ve got one day left!

We’re fully funded! We have 14 great folks to thank for materially contributing thus far, plus countless more of you folks from our community who helped us all reach folks and get them involved!

Thank you all for the support! Update coming soon.

WebODM interface up and running with arm64 docker images: 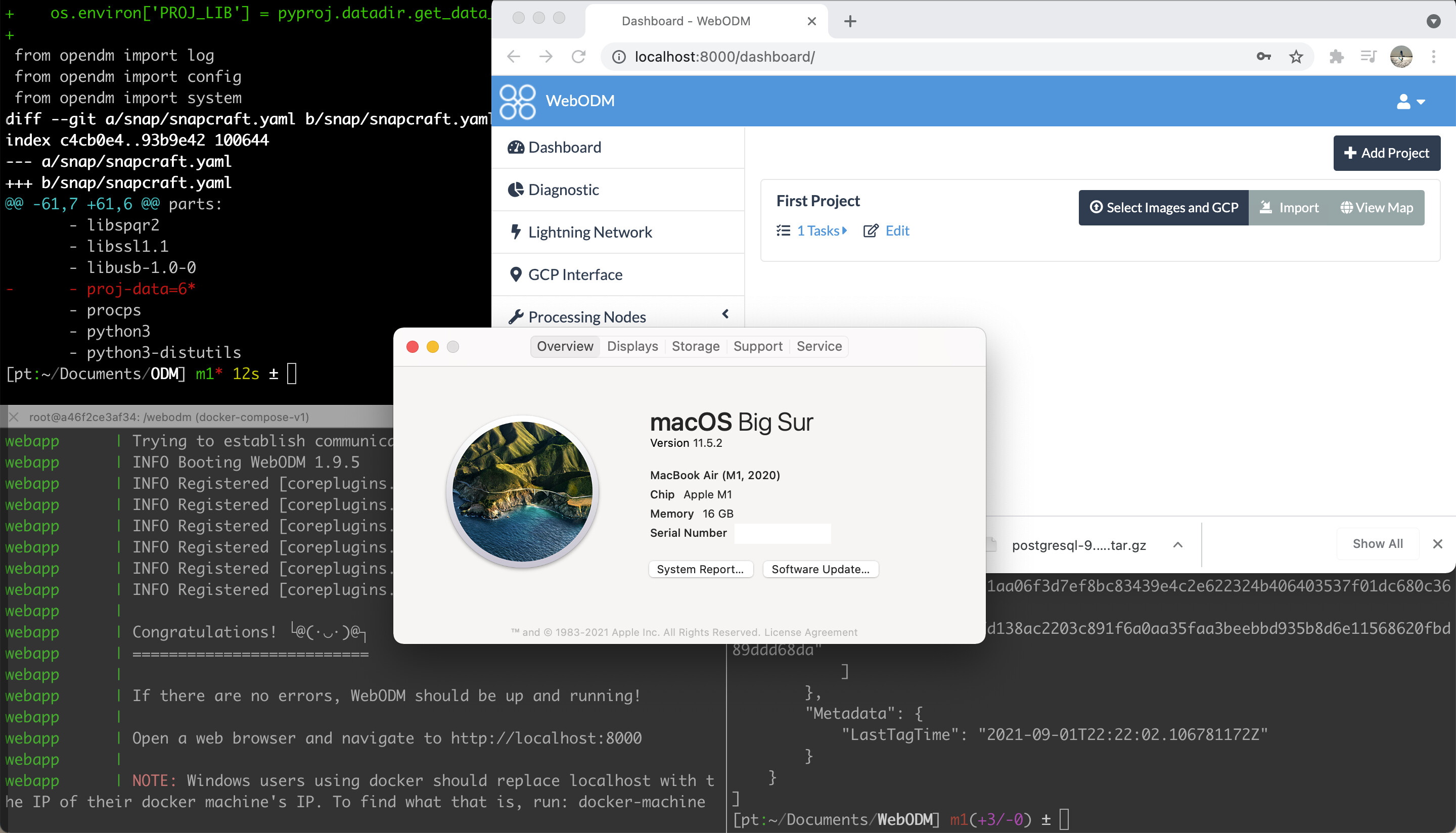 Need to update our build process on GitHub to automatically create these.