I test the 3 software at the same time in the same workshop. 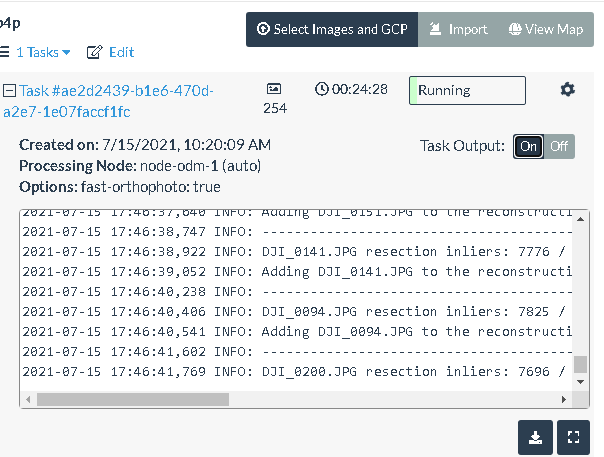 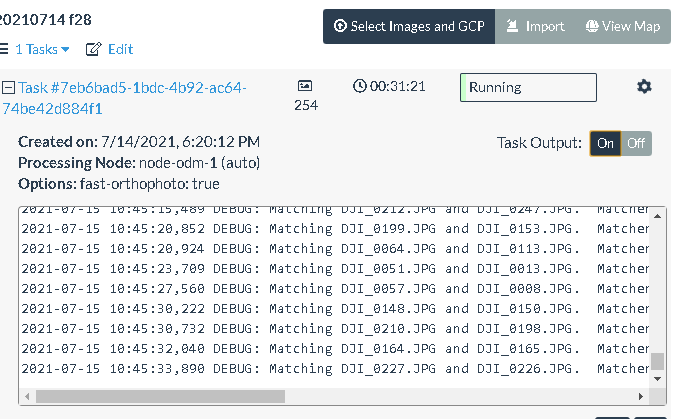 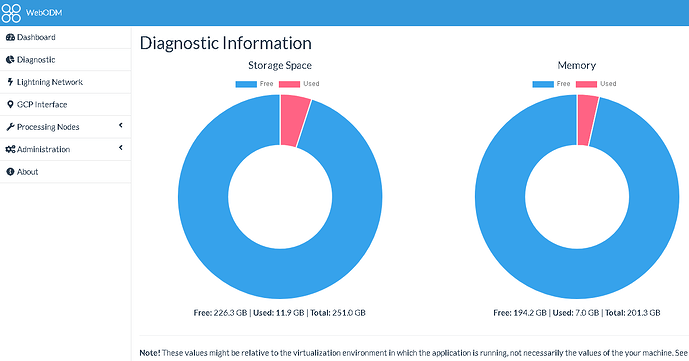 from beginning, the 3 apps process useage of CPU and RAM 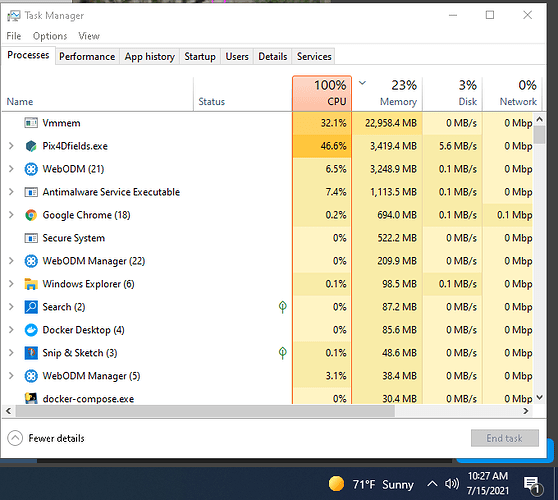 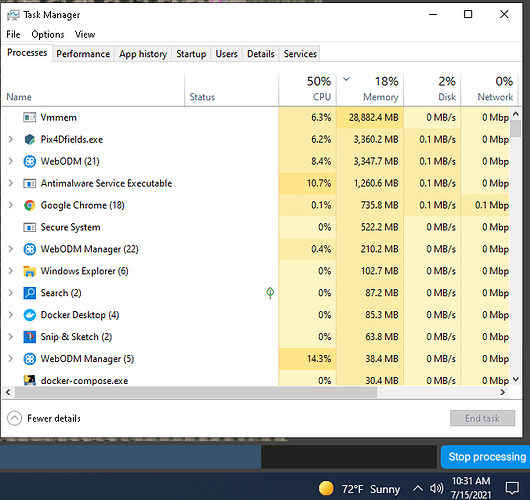 pix4d Filed finish in around 20 mins.

When monitoring the usage, the pix4dfiled use most of CPU when it start. Looks like pix4D doesn’t require too much RAM.

The native is using much less CPU all the time and very low RAM.

Look like the windows version doesn’t really use the pc resource. It it can progress use all resource of PC, it will much faster.

Pix4DFields works substantially differently than WebODM. We are not going to even attempt to match the runtime or memory requirements of Pix4DFields, because they work differently (run Pix4DFields with an urban scene, you’ll see what I mean).

In the future, there might be the case for developing a new processing engine that uses approaches similar to Pix4DFields for agriculture-specific scenes, but it’s a substantial effort (interested in contributing?)

understand the pix4dField is special for agriculture.
The big different from urban scene is the difficulty to finish it fast.
The WebOdm also have a forest mode, Is that for agriculture scene?

The agriculture uses a lot drones. 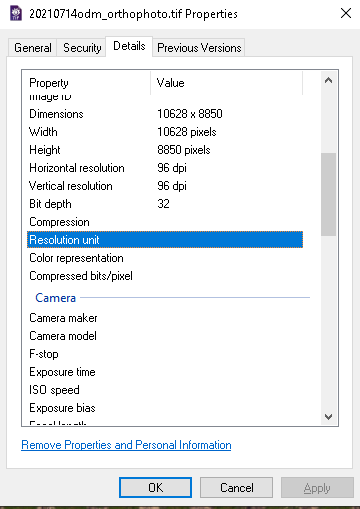 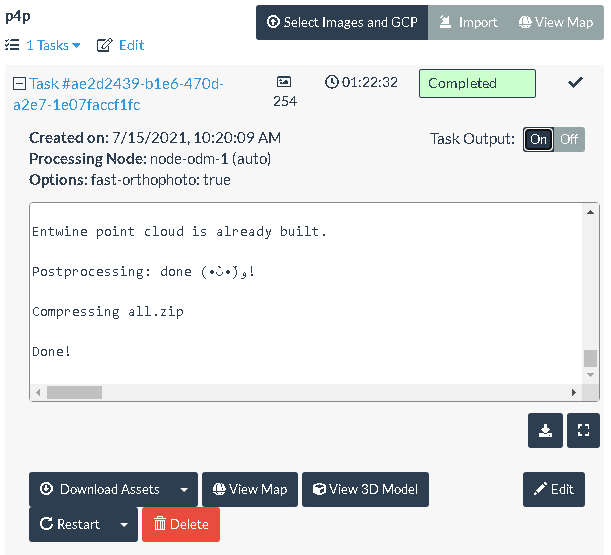 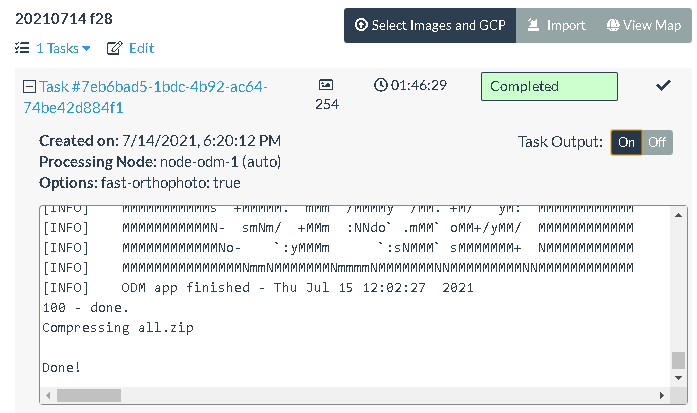 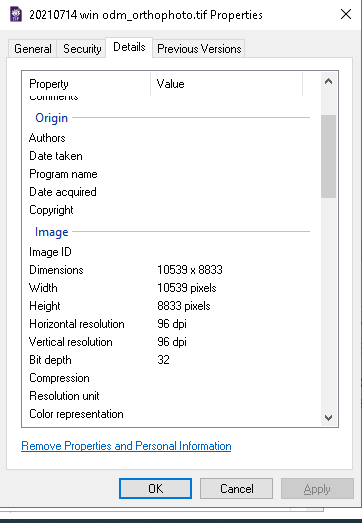 understand the pix4dField is special for agriculture.

The closest comparison between pix4d fields and webodm would be to use the --fast-orthophoto option.

But even then, you’re comparing a photogrammetry tool (WebODM) with a mosaicking tool (Fields). It’s kind of like doing a speed comparison between a truck or lorry and a sports car: it’s not a comparison that makes a lot of sense.

But, as long as you’re doing it (I understand the love for the sports car), use the flag above to at least for completeness of the overall picture.

Pix4DField has some planarity assumption but actually makes a decent job as long as a single plane can be seen (most likely the ground). Sure, it is not suited for many cases, but as you found out, its speed is unbeatable. I agree that’s a nice piece of software with some neat algorithms.

Comparing with Pix4DMapper would be a fairer comparison.

But again, you’re comparing a multi-million company with several dozens of developers working 8 hours a day, with an open-source software where most people usually spend these 8 hours for another company.

Nevertheless, as one of the OpenSfM contributors, I have ideas for better and faster handling of planar scenes, but as mentioned, it’s about time, days are only 24 hours.

This paper is a good candidate : https://people.eecs.berkeley.edu/~yima/psfile/Planar-CVPR12.pdf OpenSfM has everything, we just need to implement the track construction trough homography linking, get the homographies for each image, recover translation and rotation, triangulate point on the plane and then bundle. Would be much faster than the current incremental SfM. 2-3 weeks works, I guess.

Do you think it’d be a worthwhile candidate for a Quadratik funding drive like we’ve done for other work?

Do you have the team you need to do such work? Do you know how much it would cost?

I would not be able to do it as a side project for money given my current employment, so if anything happen on my side, it’ll be for free : 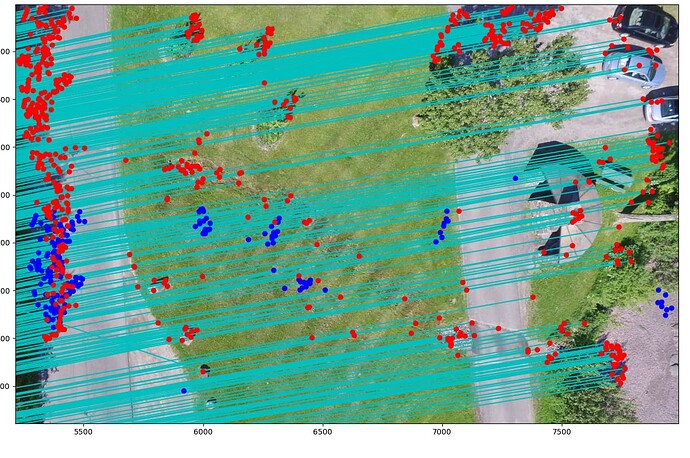 This is many excite… 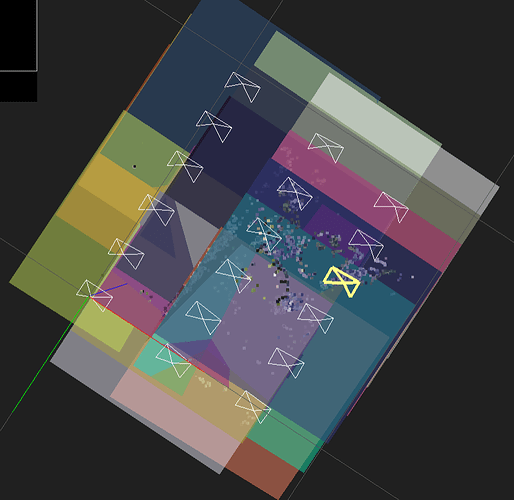 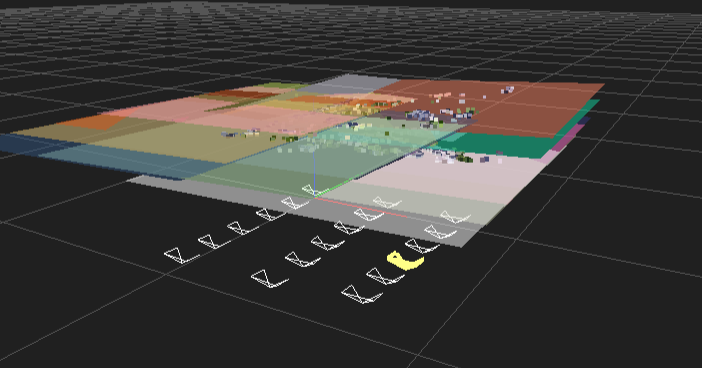 What is this mean?

It means Piero is successfully working on near real-time processing of images for flat areas.