For example, in the datasets below, the one on the left was flown with an M3 (~20MP images) and the one on the right was with a P4 multispectral. GSD for the M3 (RGB) images is 0.8 while gsd for the multispec images is 0.7. I’m ~95% sure I didn’t downsize the images while uploading so I would expect the RGB ortho to be ~10% higher resolution (given the difference in GSD) but as far as I can tell the pixel size in both orthos is the same. I’ve encountered this on other datasets with even higher differences in GSD (I just didn’t have one handy for the comparison).
If this isn’t an actual bug, I’m guessing I’m not setting some setting(s) correctly in ODM… Is there a way to force ODM to create full resolution orthos? 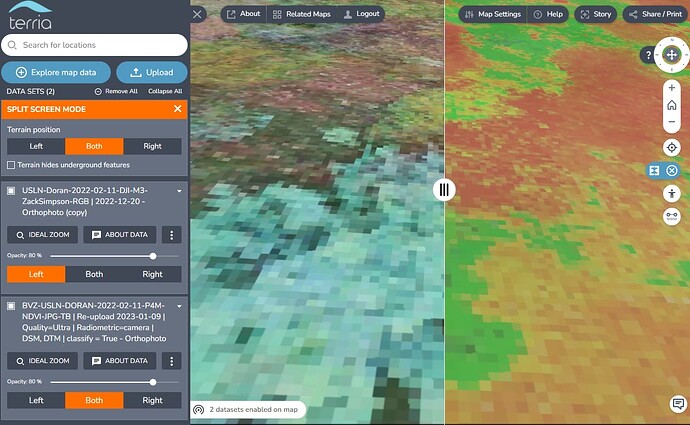 Yes, this is a thing that has bothered me for a while. The default resolution is 5cm. While OpenDroneMap will pretty accurately calculate your intended ground sampling distance, it will not exceed that default unless explicitly requested to do so.

I’ve been wondering for some time if it might be nigh past time to switch the default to something higher, e.g. 1cm. If one were to fly at e.g. a 2cm GSD and process it even with that default, OpenDroneMap would still return the estimated resolution, which would likely be close to 2cm.

Per this conversation: https://community.opendronemap.org/t/output-resolution-o…f-orthos-in-webodm-seems-to-be-fixed-and-not-a-result-of-image-resolution/14404 I think it makes some sense to increase the default resolution, given we now calculate GSD and don't go above it unless unwisely requested to do so. 1cm seems like a good compromise these days.

Thanks for the additional info.

I’ll rerun those two datasets with lower ortho resolution and see how it goes.