Not seeing the orthophoto kmz file

Otherwise, all Assets look great. I opened the Assets zip file and don’t see it there.

Can you upload the all.zip and the processing log to dronedb.app?

Thank you. I am not in a rush for a resolution.

The community forum does not appear to allow upload of a zip file, so here is a link to the unzipped folder.

I need a tip about finding the path to “the processing log to dronedb.app”. My searches had no useful results. I also tried ‘Dashboard > Tools > View Logs’. I did, however discover this URL to ‘dronedb.app’.

I did not find a way on WebODM to identify the Build of my current install. ‘1.9.1’ is displayed in ‘About’. However I did invoke ‘Check For Updates’ and my install is earlier than Build 43.

dronedb.app is a website for storing, visualizing, and sharing sUAS data.

You would export your all.zip from WebODM and upload it there to get a share link for the forum.

You can check your build on the splash screen when you start the program, as well.

Have you updated to Build 43 now?

Ah, I was not aware of the existence of ‘dronedb.app’ or how it is being used by the ODM project, so my interpretations were very different.

I just updated to Build 43. Thanks for the tip about looking on the blue splash screen when WebODM opens.

There are a number of different ways to get it, but one way is to press the Download button below the console for the task, which should then prompt you to save the processing log.

The ‘Download Assets’ button for my task did not reveal ‘Processing Log’ as an option. See uploaded screenshot.

I can reprocess the task for hours, using Build 43. 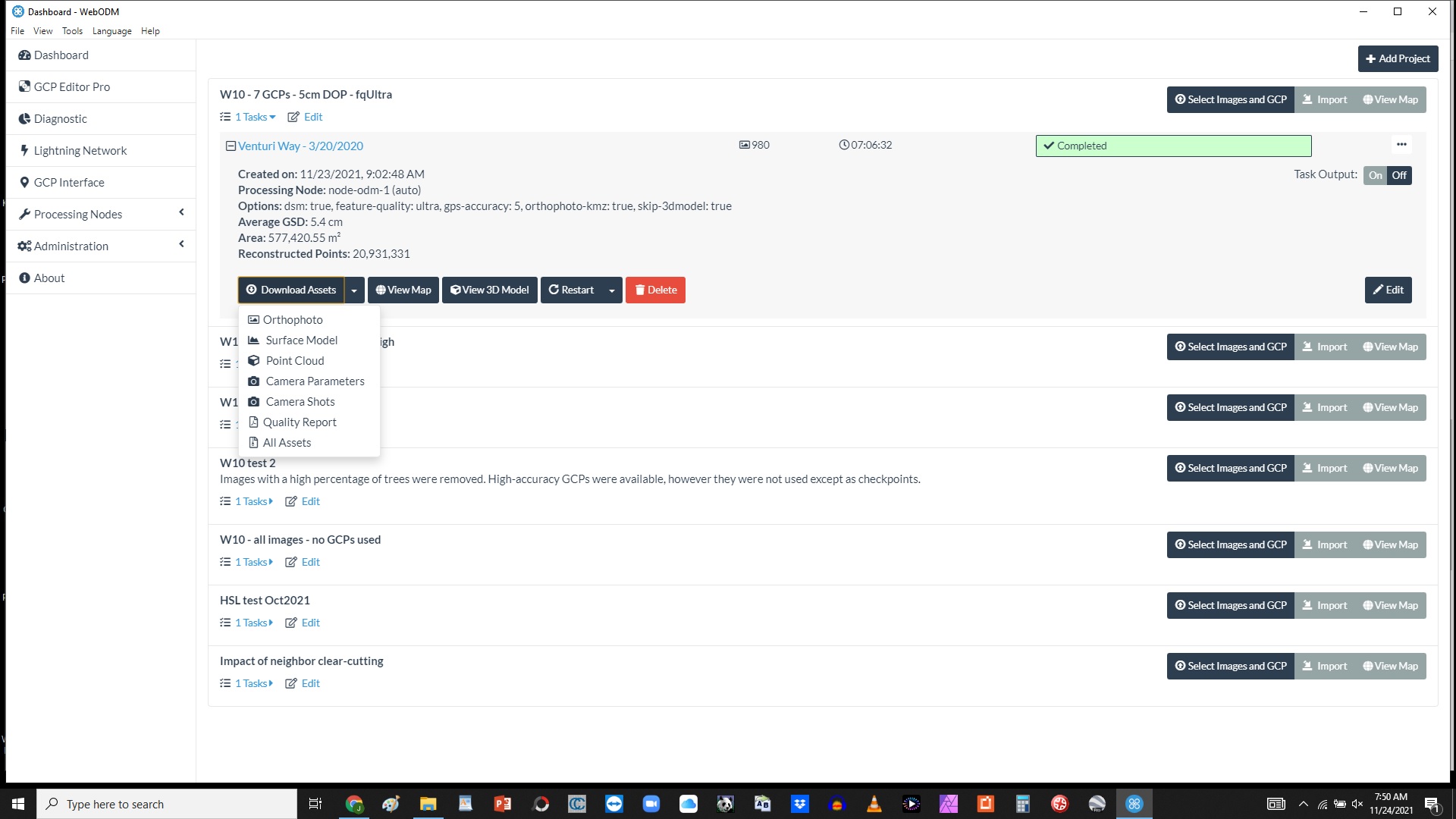 If you provide the exact file name for “the processing log”, I can search for it on my laptop.

Ah, you meant the ‘console.txt’ file, which can be downloaded after clicking ‘ON’ next to ‘Task Output’, then clicking the small icon on the lower right. 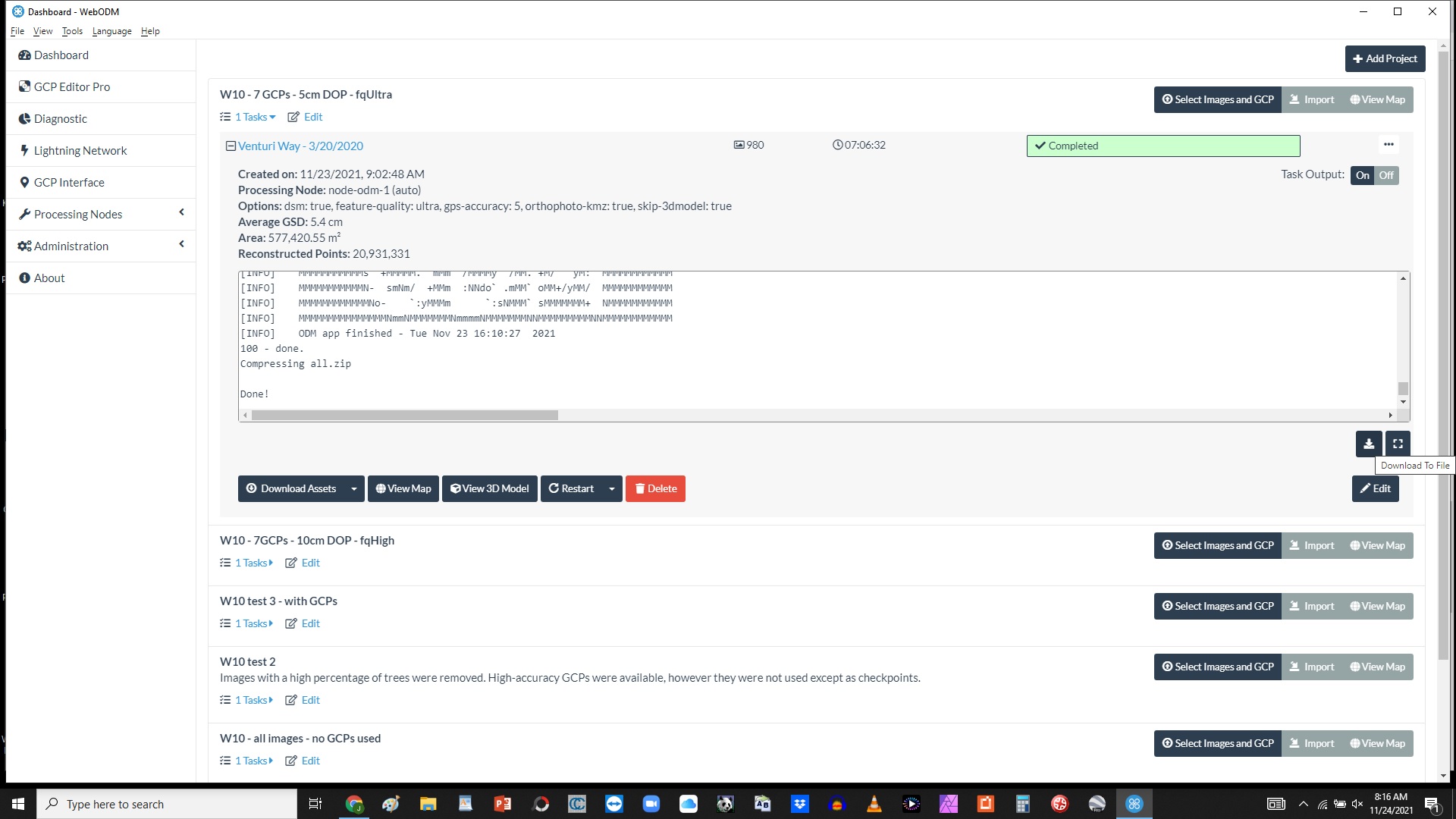 Link to the console.txt file.

I can Restart with Build 43 to try to get the kmz file generated.

However there are at least two ways to interpret “From…” in the dropdown list in attached Example 3. Does “From” mean "after ___ step/stage has completed, or just prior to ___ step/stage starts? 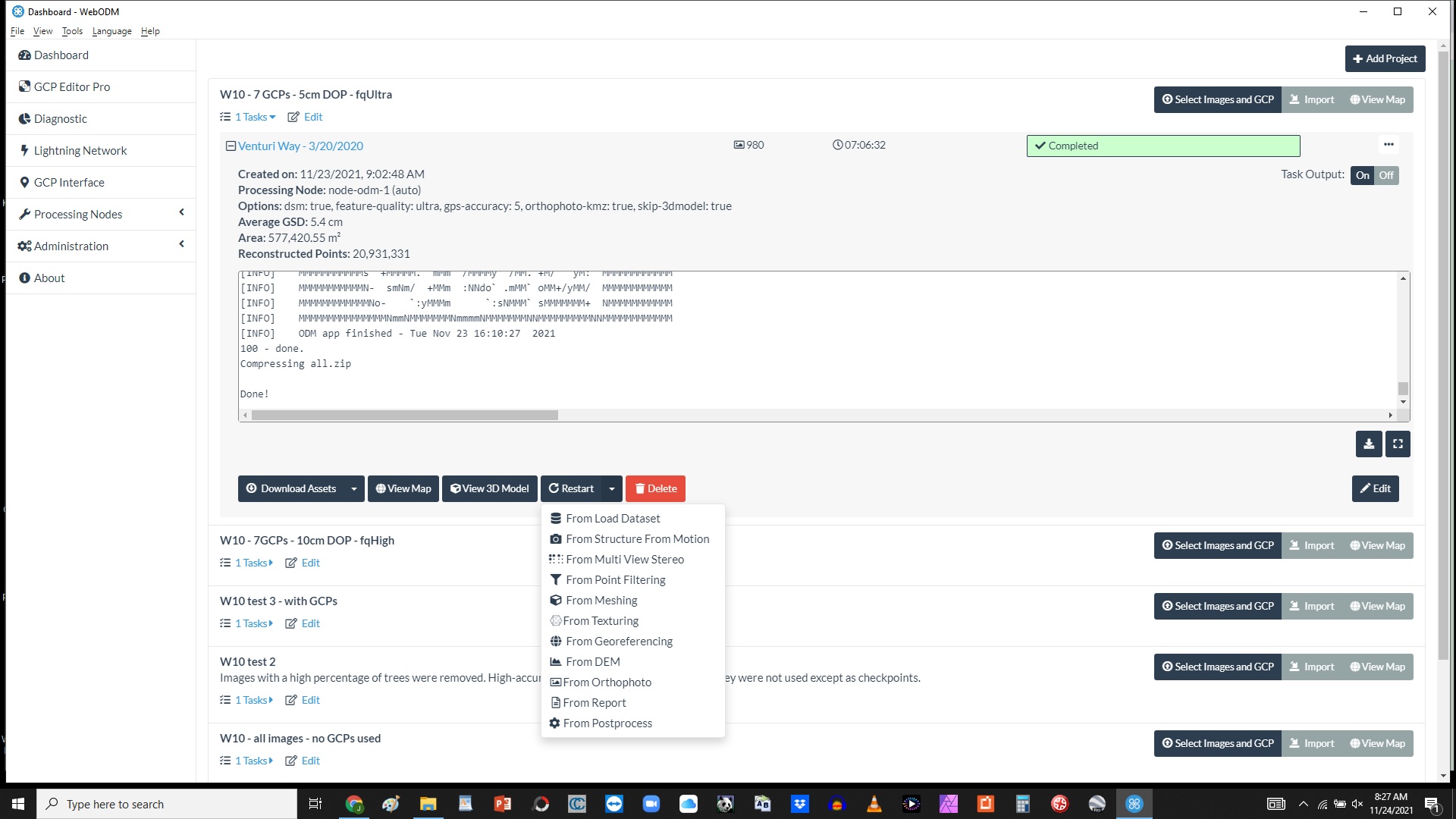 Thank you. Processing started immediately after I selected ‘From Orthophoto’. It may be many hours before completion.

When Processing has completed, I plan to use Download Assets and search for the file with the kmz extension. (If that is what you meant.) Or browse the folder from the extracted zip file. 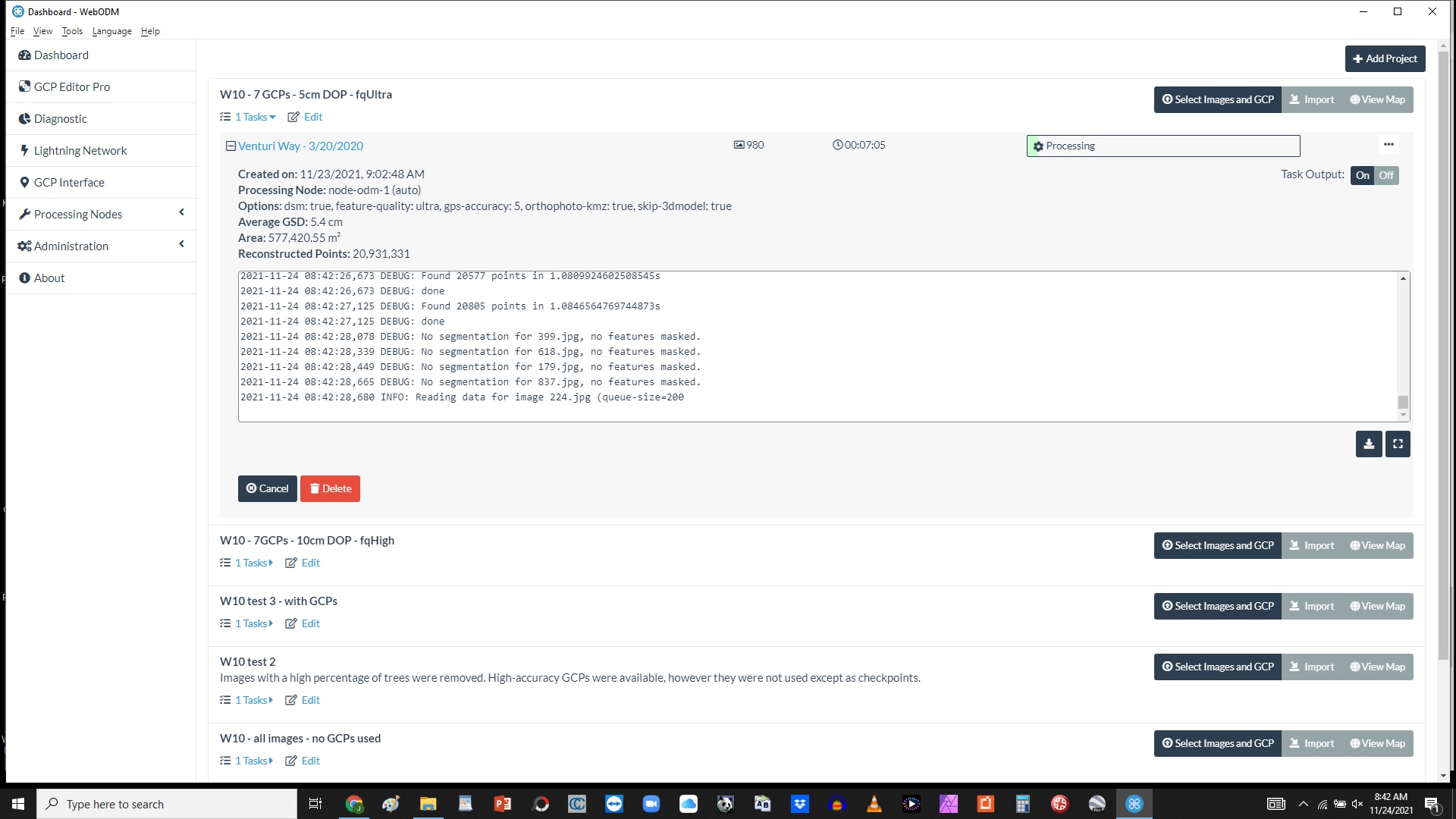 Oh… you meant to navigate to the state shown in Example 5 below. Thank you. 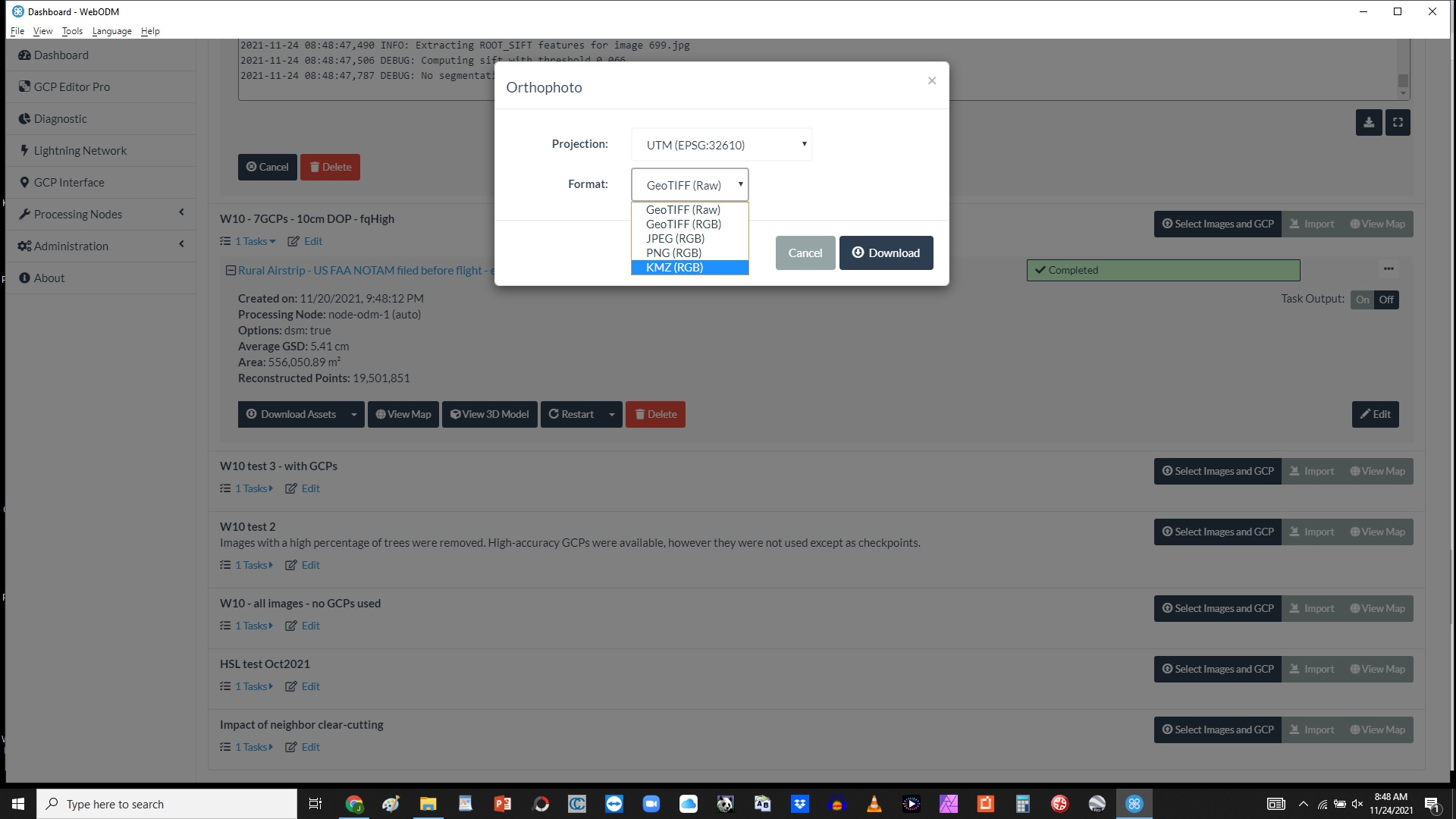 I stopped (re)Processing and downloaded the kmz file. Looks great, except it would be nice to avoid the black (or any) background. 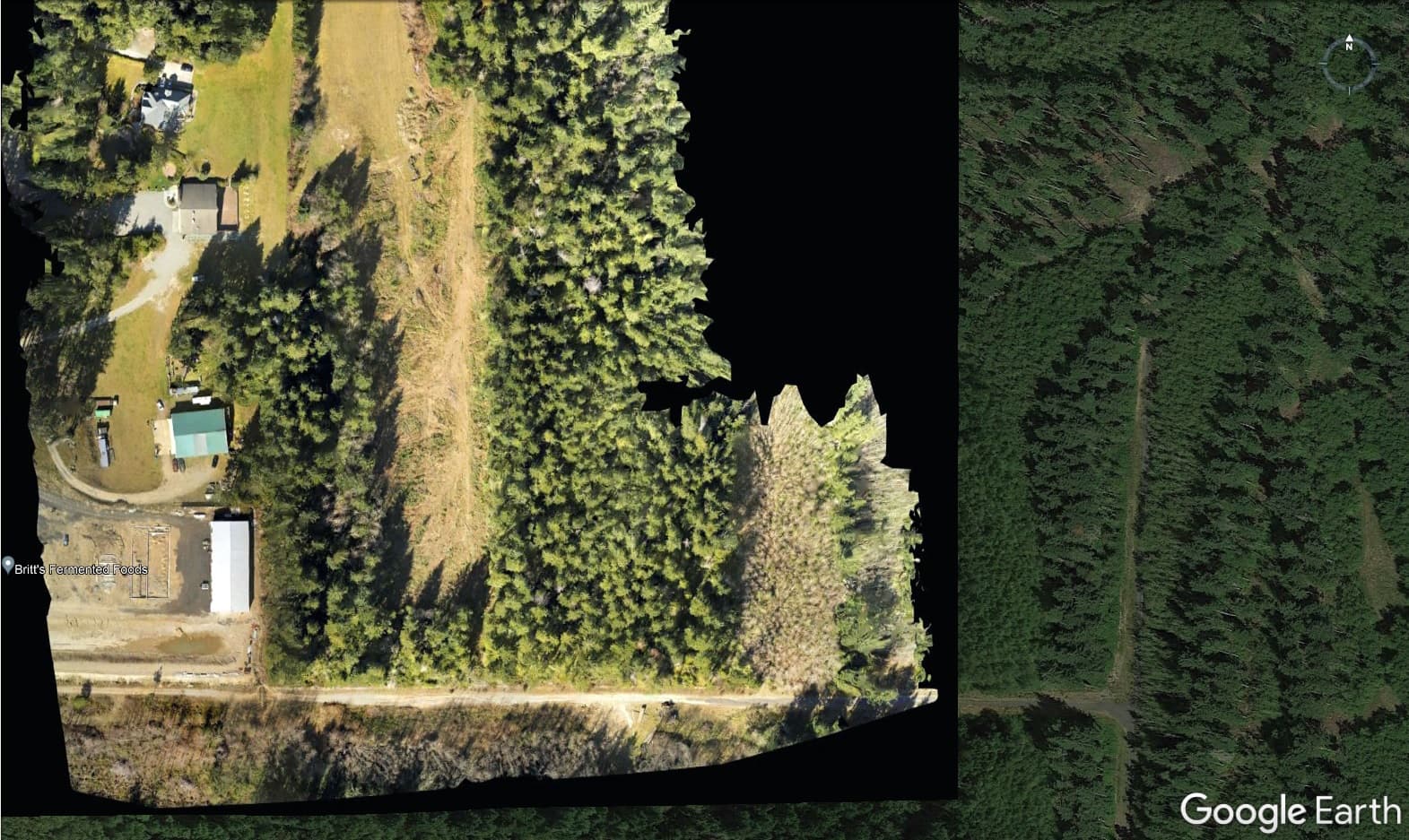 You should be able to control what the background transparency is like in Google Earth.

I remember I couldn’t find a way to create a KMZ with transparency (so the black background will probably be there); if anybody has insights in how to create KMZs (or example of existing KMZs) that have transparent backgrounds, please share.

I’m searching for some resolution. The Google Earth webpage about developing a kmz file may be useful. This webpage looked promising until I tried the method and it apparently worked only on an earlier version of GE, or only with kmz files known to the author at that time. There might be a clue in this thread.

A resolution may be in this Google source for Developers.

Meanwhile, and this may already be known, if a WebODM user chooses an option under Restart, then Cancels processing, the ‘Download Assets’ button disappears. This makes it difficult to direct WebODM to generate a new kmz file.

Again, I’m not in a hurry for a resolution.

See example 7 below, after I extracted folders and files from the kmz file generated by WebODM. Maybe there is a way to remove any totally-black or near-totally-black “edge/boundary” jpg tile files in the many tile folders, prior to final saving for export to Google Earth. The edge items are often of less quality anyway, so the removals wouldn’t usually be an issue. 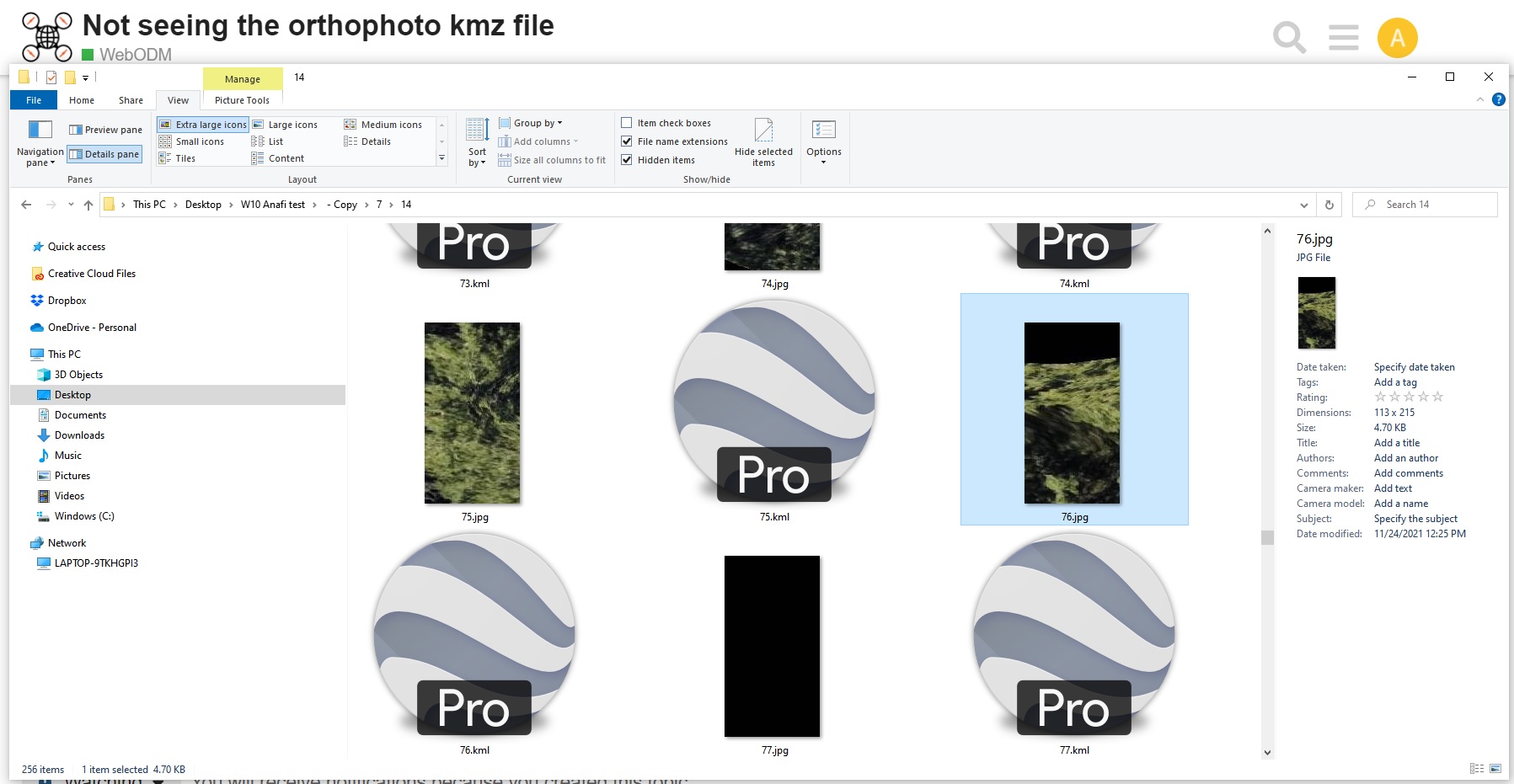