I have a previous installation of webodm that has about a dozen projects in it. I reinstalled my computer and previously I could just open webodm up however it wouldn’t open it just hangs on loading screen.
I forgot about it for some time but recently had a client contact me about a previous job.

Is there some way I can import the data from the other webodm into my current working one via copying the files or something?

I know if you didn’t backup the database you can click on import and import the all.zip file. I know you wont have the photos but ortho point cloud model ect should import.

Did you export the all.zip file for the older jobs?

If not, and nothing was deleted when you “reinstalled my computer” everything may still be in:
whichever drive you had WebODM on:\WebODM\resources\app\data\media\project\

There will be a list of numbers corresponding to the various projects, and all the images and output files for each task will be there.

I have all the original photos I just don’t want to have to process them again so if i can figure out how to import it that would be perfect.

yes, they are all there and I wondered if there was a way to copy that folder to the new install?
I don’t have zip files.

I’ve tried copying numbered directories that I’d moved to save space back into the working NodeODM directories, but that doesn’t work.
In any case, it’s better to view the .tif files in something like GIMP, and I use Meshlab to view the 3D models on my computer.

However, after just doing a test on a 3500 image dataset, I found you can externally zip all the files from a task and successfully import them into WebODM, where you can display everything produced originally- orthos, 3D etc

If you have the folders with said data
C:\WebODM\resources\app\data\media\project\#\task\########\assets
then just zip up the folders and files in the assets dir and name it yourproject.all.zip 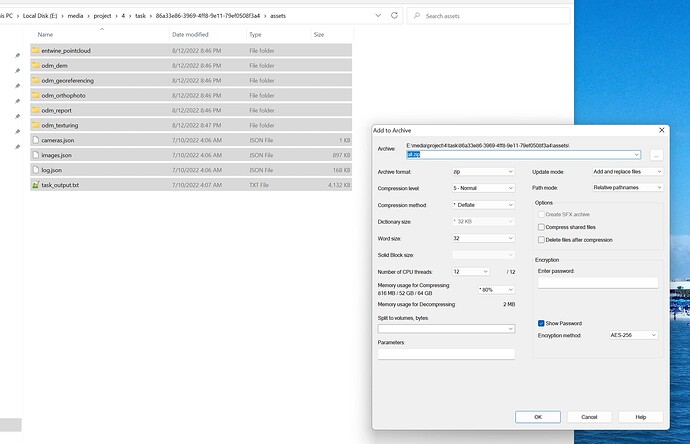 Then create your project in WebODM and then instead of uploading images click on import and select yourproject.all.zip as the upload.

It will then import and you will have your project files to view just no photos.