I am new but have a love/hate relationship with WebODM.
I love it when its working, but docker has something built in to the software that tells it when WebODM is working too well, which then causes it to crash and do nothing except display “Docker desktop has stopped” and when i go to “preferences”, everything is greyed-out and the perpetual blue circle is rotating in the center of the screen.
Ive tried quitting out of it and shutting down the computer, but after i turn it on and open docker, its the circle of doom and “Docker desktop has stopped” again.

Oh no, please don’t tell me Docker decided to update itself beyond v4.12 on your machine

If you’re running fine, then you’re not subject to whatever this issue is! Keep updating, as Docker is always improving their platform integration with MacOS’ virtualizer framework.

Whew! I’m on an M1 Max and I’m happy to run a short project later today to see if it fails – but I acknowledge absence of evidence doesn’t mean the problem’s gone away.

I apologize for the delay in responding as I did not realize that an update to MacOS was coming. My run just finished, so here’s the results.

It took 14 hours 12 minutes 3 seconds to finish, which isn’t so bad considering it’s an ultra/ultra. The orthophoto is good enough I can count the geese in the big pond, heh. I look forward to tinkering with the other products. I have some thoughts on improving the quality report which I will post in a separate thread.

I see current Docker works for you… Amazing. This is so inconsistent an issue…

Alas, I did not deploy the installer but I’ve been curious as to how it would work on my system so I will probably give in to temptation sometime soon if only to help support the project.

Okay, so I waited LIKE TEN WHOLE MINUTES before giving into temptation and buying the installer.

I uninstalled Docker Desktop entirely before launching the installer. It was very quick though the window is a little narrow so it looks a little silly when downloading – screenshot attached. Total time between getting the email with the link and selecting images to process was less than fifteen minutes.

This is really slick. 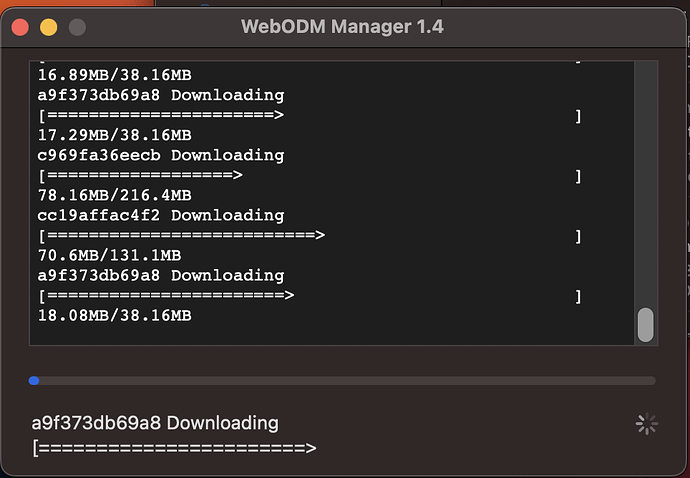 Oh, thank you so much!

Glad it worked out for you, as well!

Okay, so I waited LIKE TEN WHOLE MINUTES before giving into temptation and buying the installer.

Thanks for giving it a try!