Just did three quick flights at 100ft, 80ft, and 40ft. I thought I would be able to cover the whole building, but apparently I was wrong! Does anyone have any advice on how to make cleaner architectural models? I don’t necessarily need accuracy, I mostly want it to look a little less warped and to fill in the holes.

You’re going to get the usual spiel:

What settings/parameters did you use?

Can you post the dataset for others to play with?

Note:
What were the camera angles for each of your surveys?

The area where the arrow is pointing to is referred to as icing by some. I know that’s what the Pix4D community likes to call it at least.

This is caused by there not being enough data to create the model and the software is trying to fill in the gaps. In order to prevent this, you would need to get some ground-level images. This can be from a DSLR, cell phone camera, or as in the model below, I carried the drone around the building and shot photos manually every few feet.

Your data acquisition flight can also have an impact. If you intend to simply make an Orthomosaic, then a simple grid pattern flight with the camera at 90 degrees (nadir) will work well. If you want to gather imagery for a 3D model, a crosshatch grid should be flown with the camera at an oblique angle at about 30 degrees (or depending on the app, 70 degrees). You just want to make sure that once again, the camera angle is such that you don’t capture any sky in the imagery.

Getting data below the eves of a building is also a problem because it will be near impossible to capture the building without also capturing the sky in the imagery. Capturing sky makes for a horrible model, especially in an environment where you can’t mask photos or clean up the point cloud easily. My model of the Govan Schoolhouse took several hours of masking out the sky before I processed it in Agisoft Metashape. The model below is the super low-quality version needed to host it on a free account.

I know you can export the point cloud so that you can clean it up in 3rd party tools, but I’ve not yet tried to do that with WebODM simply because I have MetaShape, and well that’s what it’s for. 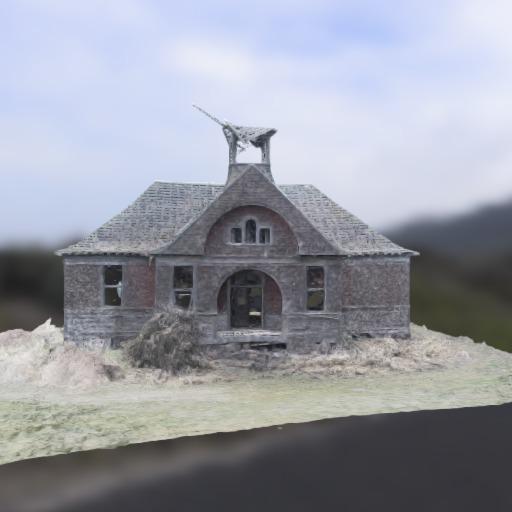